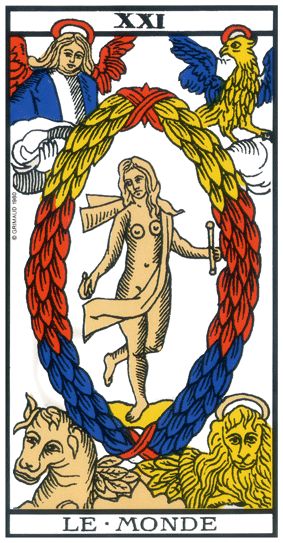 The World is the twenty-first card of the tarot de Marseille.

Hidden symbols of the world card

Summary of symbols of the World: time, creation, fertility, fertility.

The goddess of life is represented on the world card. It is motionless in the center and represents an eternal and blazing fire in its fixity. It is in a position of dynamic balance and also symbolizes activity, youth and life.

The Moon district adorns the forehead of the goddess as a horn. It is a symbol of fertility, and refers to the menstrual-maternity cycles.

The oval shape of the garland alludes to female symbols.
The egg, for example, is the concentrate of new life. Almond is the fruit of marriage and fertility.
The snake who bites his tail represents eternal transformation.
Unveiled breast and female organs are the seat of training and birth.

An Angel, a Taurus, a Lion and an Eagle are at the four corners of the map. They represent:
* Aquarius, Taurus, Leo and Scorpio.
* the four elements : Air, Earth, Fire, and Water.
* the four colors minor mysteries: Swords, Deniers, Sticks, Cups.
* the four magic imperatives : knowledge, will, daring, silence.

Message from the world map

Day of the week : Monday and Friday

The effect of the card continues one to three months.