The tarot de Marseille card: The Tower or House of God 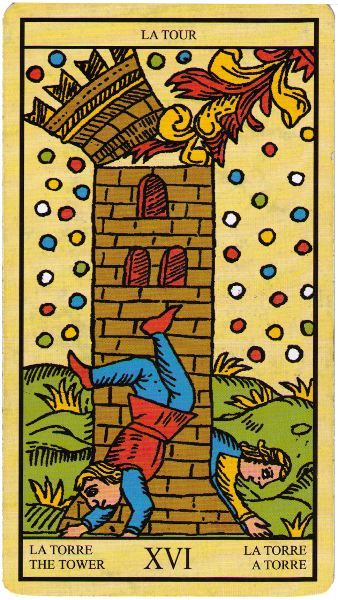 The Tower also called House of God is the sixteenth card of the Tarot Marseille.

Summary of symbols of the Tower: Tower of Babel, selfishness, ambition, uncontrolled energies.

The Tower or Maison Dieu represents the Tower of Babel, a tower built out of selfishness and ambition to reach the divine kingdom.

Construction is alive but sensitive.
Men are trying to climb the tower, thirsty for power.

The two characters symbolize ambition and pride. They hurried to climb over the top of the Tower which collapsed with them.

The pink and gold field represents perfection and hope. The characters who fall into it must regain hope and keep the smile and the strength to move forward.

Tower is one of the worst cards in the Marseille tarot, both upside down and upside down.

Message from the Tour card

Tower which partially collapses passes the following message: the consultant has the right to to build. He is also encouraged to awaken, to evolve, but he should not believe that he can match the Creator. In summary, selfish thinking and the feeling of omnipotence or superiority must be discarded from the consultant, otherwise, they will cause his loss.

Buddhist philosophy is evoked here: nothing is eternal, everything is constantly subject to transformation. Even if the change is violent and painful, it should be welcomed as a positive renewal.

Change is certain and it is necessary to know how to abandon old habits when they disturb. The Tower indicates the moment to change, to accept, to evolve.

Day of the week : Tuesday Saturday.

The Tower is associated with: the ruins, the walls, the ruined castles.

The effect of the card is quick: two weeks.