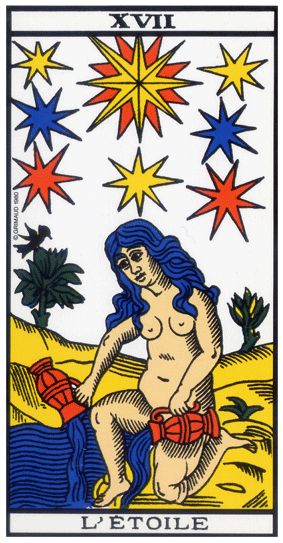 The star is the seventeenth card of the tarot de Marseille.

Hidden symbols of the star map

The soft and beautiful face of the young woman represents femininity and calm.

The content poured by the red and gold amphorae in the pond revives putrid water.

The big star who overlooks the stage is Lucifer. It symbolizes the luminosity which guides Man lost in the desert of matter.

The eight rays red represent the spirit.
The other eight, gold, represent perfection.

The seven stars surely allude to the Big Dipper or to the Pleiades. They form a crown around Lucifer.

With Lucifer, we can consider that there are eight stars: eight being the symbol of infinity, of the cosmic order, of justice.

The kneeling woman recalls the posture of the medieval knight during his inauguration. She receives a task and a new status from above.

* At 17.
* To the goddess Anahita.
* AT Venus.
* AT Matrimah, mother of all creatures.
* AT Lucifer, bearer of light, morning star.
* To the letter pe of the Hebrew alphabet.

Day of the week : Friday.

The effect of the card is rather slow: one to three months.