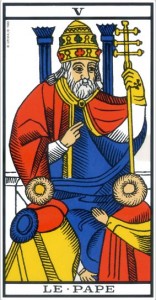 The Pope is the fifth card of the tarot de Marseille.

Hidden symbols of the Pope’s card

The Pope is seated between two columns of the Temple of solomon.

Blue and gold are its colors; they represent wisdom and spirit.
The touch of red reminds of active and combative faith.

His smile is facing the arena of existence. It takes a step back from existence itself.

The role of the Pope is to reconcile opposites and to make the highest truths accessible to the simplest. He is no longer troubled by contrasts of mind. His virile and active era has passed and he accepted it. He is now full of wisdom and peace.

The triple crown he wears refers to discern abstract truths, relating to three planes of existence : the physical plane, the mental plane, the spiritual plane.

He holds in his left hand a scepter and raises his right hand in sign of blessing.
The scepter is divided into seven points: this reflects with planetary symbols, emblem of spiritual power.

The globe at his feet represents the spiritual power that the Pope exercises over the world.

His gloves refer to the medieval custom : the origin of the map is therefore not earlier than the 10th century.

His beard refers to the fact that pontiffs could be shaved or bearded during the centuries preceding the 18th century (except the 14th and 15th centuries).

Message from the Pope’s card

The Pope’s card represents spiritual authority, good advice and wisdom. The Pope is authoritarian, like the Emperor, although the Emperor is more earthly, and the Pope more spiritual. The Pope represents the mature man having reached the peak of his own potential.

The effect of the card is quite brief: fifteen / twenty days maximum.