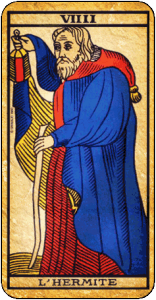 The Hermit is the ninth card of the tarot de Marseille.

Hidden symbols of the Hermit’s card

The walking stick on which the Hermit relies captures the instinctive energies of the universe. The Hermit knows he must subdue and control them.

A lantern, held in his right hand, lights his way.
Part of his coat hides the light of the lantern so as not to disturb passers-by, who are used to facing the Light of knowledge.

On the first representations of the Hermit in the game of tarot, the lantern was replaced by a hourglass. It was the emblem of time, of God saturn.

His coat is reddish-brown, like the earth, on the outside. It’s blue inside. He alludes to the priority of the heart and to the initiatory knowledge on material wealth. Initiatory knowledge does not manifest itself on the first comer.

Message from the Hermit Card

The Hermit advances slowly but surely, alone, on the path of life. It bases the future on knowledge of the past. He is aware that one cannot penetrate the mystery until one has dominated the mind. He is concentrated, alone, in his meditation. The knowledge he has already acquired is nothing compared to the knowledge he has yet to learn: he is aware of it. The Hermit is modest.

* At 9.
* At 3 x 3, i.e. perfection raised to power.
* To the sefira lesod, foundation and potential of the seed.
* To the letter têt of the Hebrew alphabet.

Day of the week : Saturday.

The effect of the card is very, very long: six months to three years or more.