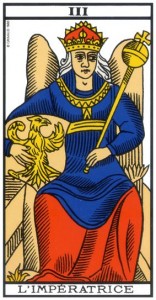 The Empress is the third card of the Marseille tarot.
She is one of major arcana.

Hidden symbols of the Empress card

Wings of the Empress are the air symbol, the mental plane, the speed of the intellect, the versatility of ideas.

The crown and the scepter are two imperial emblems of power, they symbolize here intellectual superiority. The Empress ” rises above the world of objectivity to the immobile sphere of perfection. ” (The secrets of the Tarots).

His smile emphasizes awareness of its inner strength. Blue of her shield represents the serenity invading the Empress. In summary: she dominates, authoritarian, without any effort. It holds its power from the perfection of the knowledge acquired, and not from the outside.

Twelve precious stones are inlaid on his crown. Only four are visible. These stones represent the twelve zodical signs, the cycle of animal experience.

Like the Popess, the Empress evokes Fertility and feminine energy. What fertility is it? Fertility intellectual of the Virgin that everything closes in itself. It represents waiting for implementation.

The empress symbolizes the idea, creation in the project phase, which always proceeds to practical realization. 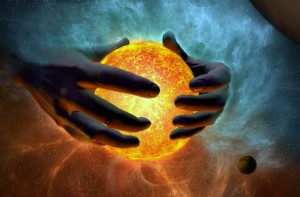 The Empress refers to the Virgin among Christians, the Venus-Urania of the Greeks, the Pythia of the Gnostics.

* At 3.
* In Binah, in the sefirotic tree, the energetic center of creative intelligence.
* To the letter gimel of the Hebrew alphabet.

The effect of the card is fast : from two weeks to a month.