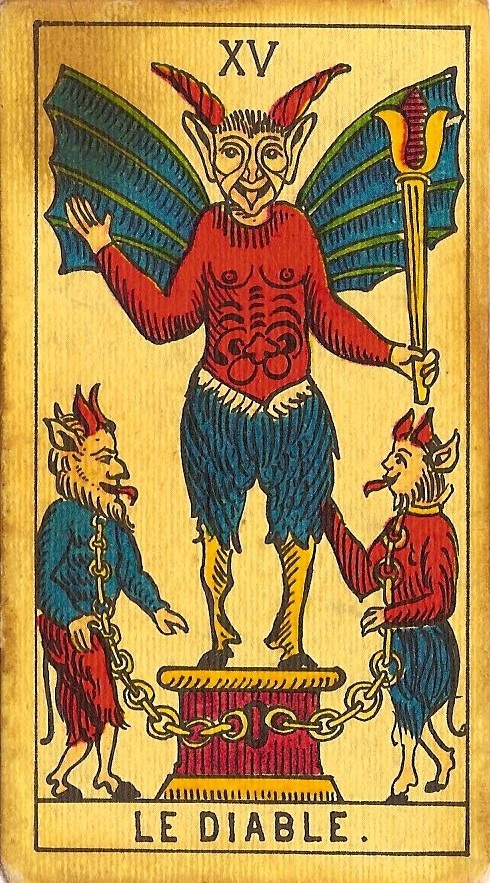 The Devil is the fifteenth card of the tarot de Marseille.

Hidden symbols of the Devil’s card

Summary of symbols of the Devil: lack of control, domination, instinct, disorder.

The colors of the Devil (yellow, blue, red and white) represent the four elements of the cosmos (Earth, Fire, Water, Air). These forces are within everyone’s reach, but they are difficult to control and subdue.

Two characters support the Devil: they are like him, half human. They are chained on the pedestal at the top of which the Devil seems to want to dominate Men and events. They both carry red and blue, but the color order is reversed on one of the characters: they represent yin and yang.

The chains represent the passions of men who imprison them and place them on an animal level.

Message from the Devil’s card

To get rid of the chains that imprison us, it is necessary to have a lot of courage and will: the consultant must act on instinct. The cosmos surrounds disorderly order and the former must be subordinate to the latter.

* At 15.
* With the Hebrew letter samekh.
* At the silhouette of theOuroboros (the snake biting its tail).
* To the horned god of the Celts: Cerunnos.
* AT Zervan, the genius of evil in religion mithriarque.

Day of the week : Tuesday.

The card works for two or three months. She continues to have influence for five to six months.