Interpretation of the card: the Emperor 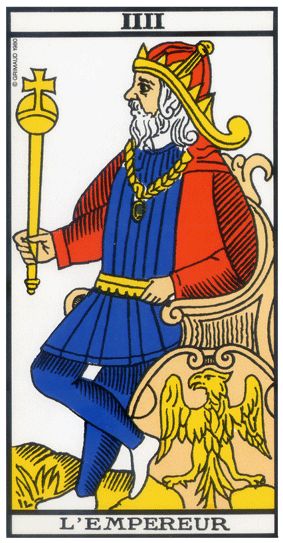 Interpretation of the menu: the emperor (arcane n ° 4).

The Emperor is the symbol of the fore and protective male presence. His intentions are serious with regard to the consultant. In general, the Emperor represents a man of prestige, of law: an architect, a mathematician, a trader, a doctor, a manager, etc.
The man in question is around 40 or 60 years old. He is loyal but proud. The consultant can lean on this man.

The couple relationship of the consultant is consolidated and stabilized in collusion or in marriage.
If the consultant is single, he can expect to experience intense feelings. Strong bonds of friendship will be created.
Paternity is predicted: the consultant must have the role of an authoritarian educator.

The Emperor presages an advantageous solution for a material problem. An inheritance and / or economic insurance are announced.
A real estate purchase not to be missed is to be expected. A lottery win can also arise.

The consultant uses his energies properly. His life system is balanced, he is in perfect psychophysical harmony.
The Emperor also announced the rapid recovery from an accident or illness. Physical resistance, robustness and vitality are at the maximum for the consultant.

Conversely, the Emperor represents a brutal, tyrannical and selfish man. He is a despotic and overly authoritarian partner who makes life difficult for those who approach him.

The Emperor announces emotional problems, a weak union and not ripe enough for a final choice. The consultant’s partner acts in a despotic and violent manner. Disputes and misunderstandings in the couple are expected.

A project will fail because the lack of protection is great. The consultant’s impatient attitude and arrogance will cause failure.
Difficulties in being understood as well as conflicts with a chief or a colleague are to be expected.

The consultant’s body and mind is penalized by his lack of balance. Abuse of energy and lack of attention can cause accidents.
The Emperor upside down represents diseases affecting the liver, spleen, pancreas, metabolism and blood vessels.